Blog - Latest News
You are here: Home1 / Short and sweet 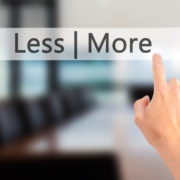 Most politicians talk too much. But not the 30th president of the United States. Calvin Coolidge, president from 1923 to 1929, was known as Silent Cal. Coolidge’s reputation for brevity was well-deserved. And yet he was renowned for  communicating with impact.

A woman once came up to him and said:

‘Mr. President, I bet my husband that I could get you to say more than two words.’

Silent Cal may have taken matters too far in his search for conciseness, but he was right about one thing: Brevity is key to   communicating with impact. Less is more!

For messages with impact – Less is more!

And just to prove it, here’s a story Ronald Reagan used to tell about a very short sermon he witnessed as a boy in Dixon, Illinois. It was the hottest day of the year and sweat was dripping from everyone in the church. When it came time for the sermon, the preacher took his position at the pulpit and faced the congregation. He pointed downward and said: ‘It’s even hotter down there in Hell’. And without another word, he descended from the pulpit. That was his sermon!

If you’d like to learn more about communicating with impact, then check out our course offerings From Better Business Writing to Presenting with Impact, we have a range of solutions to help you gain confidence and increase influence and cooperation in the workplace.

Constructive feedback: Cruel to be Kind?
Scroll to top